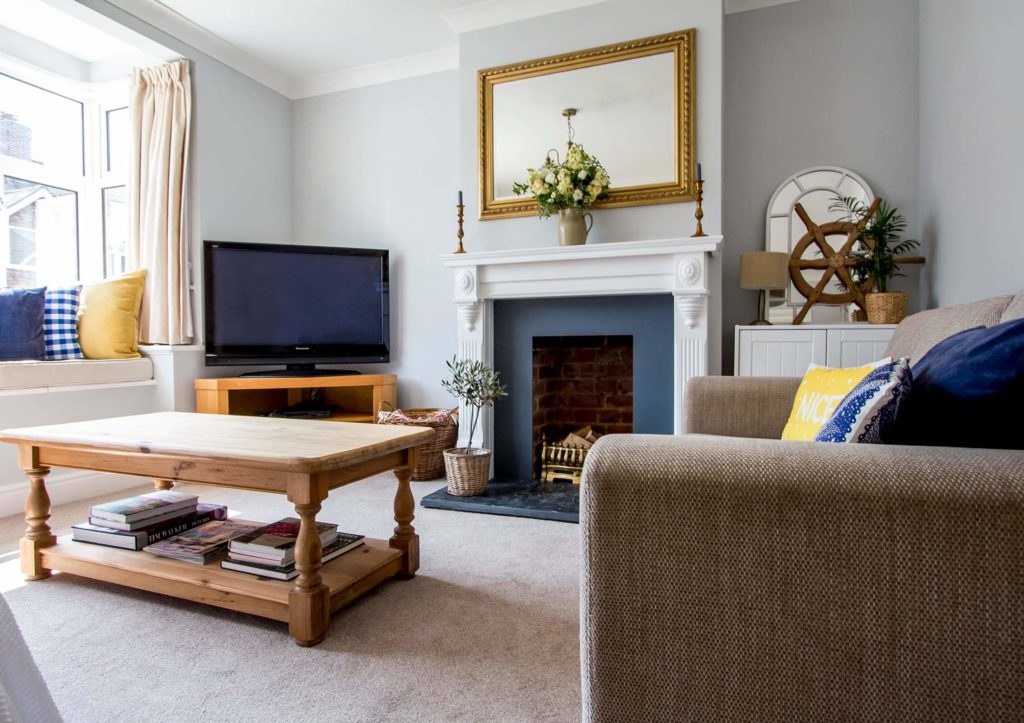 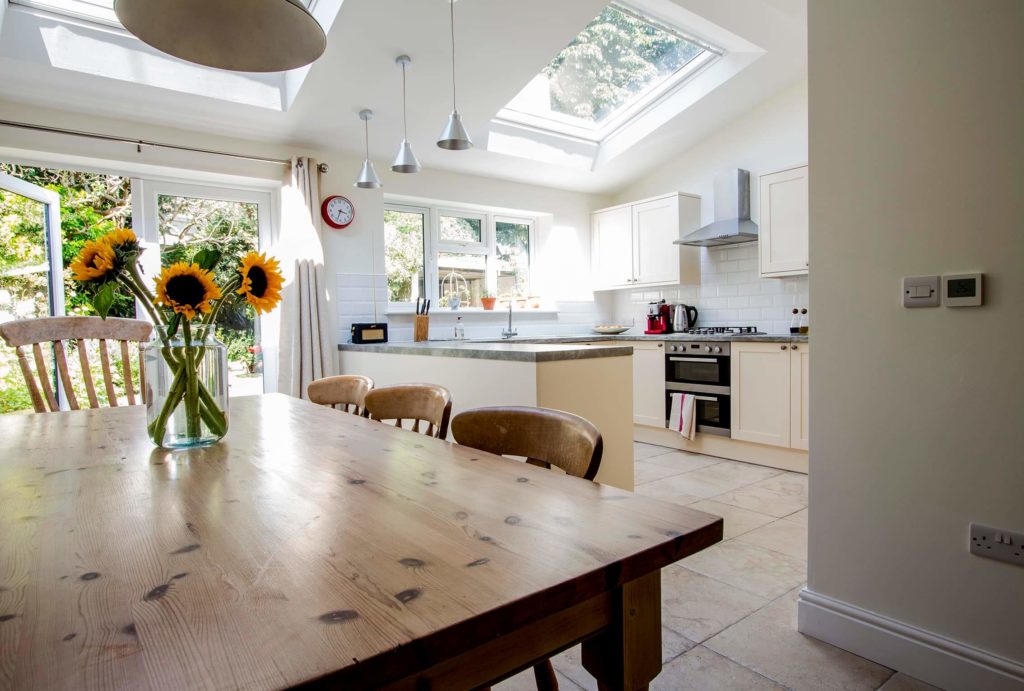 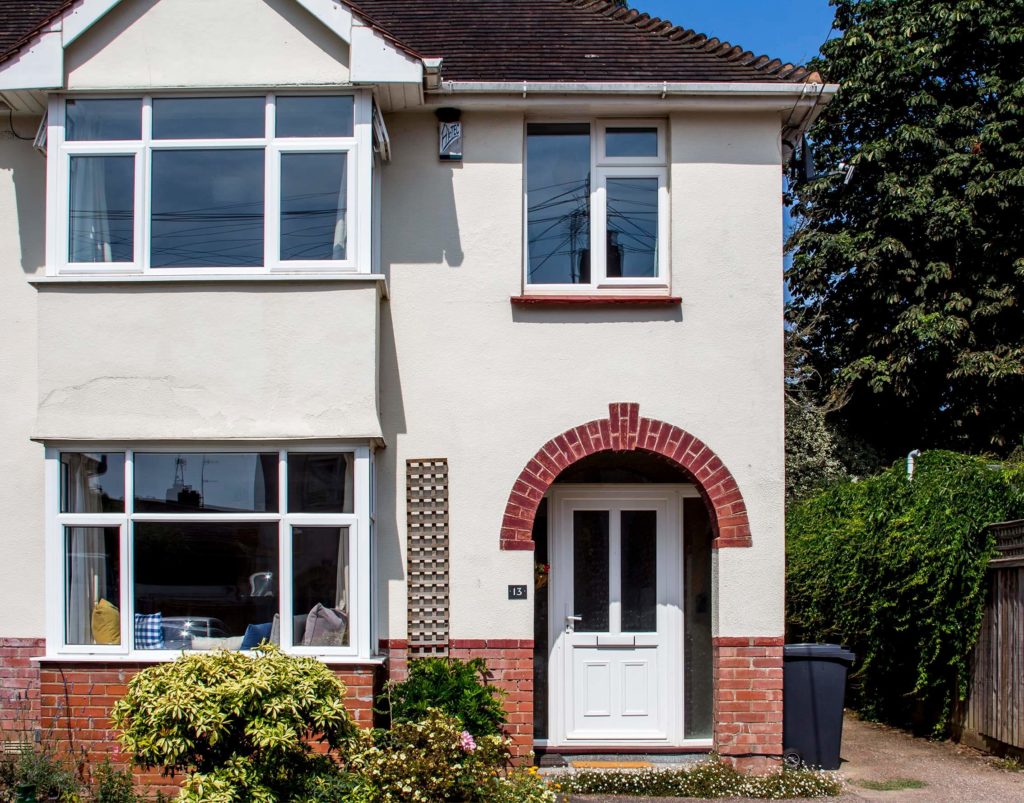 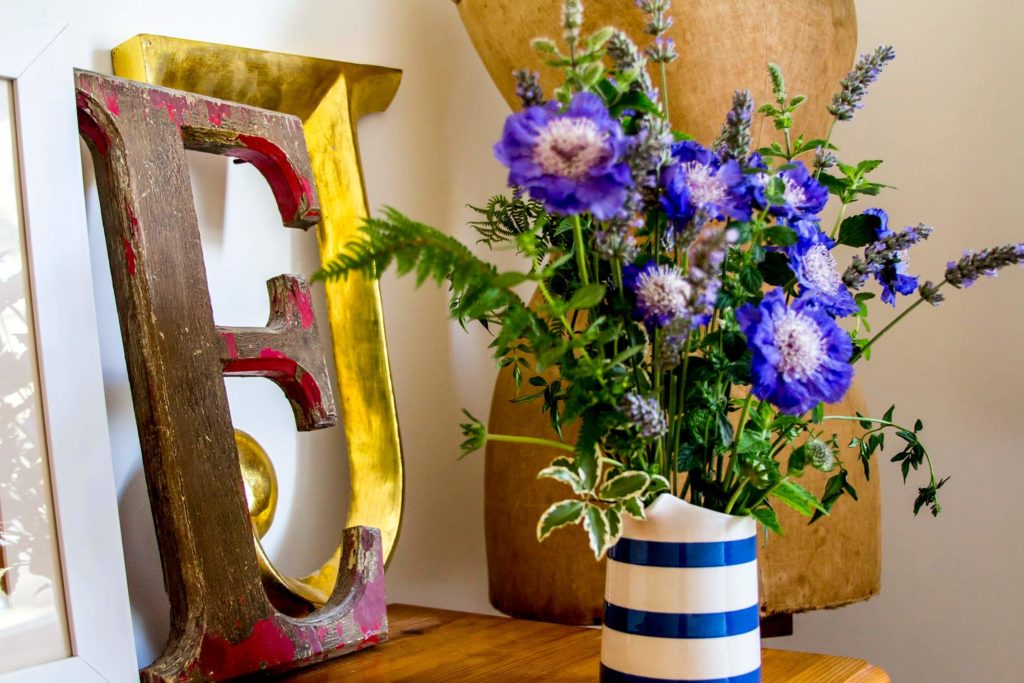 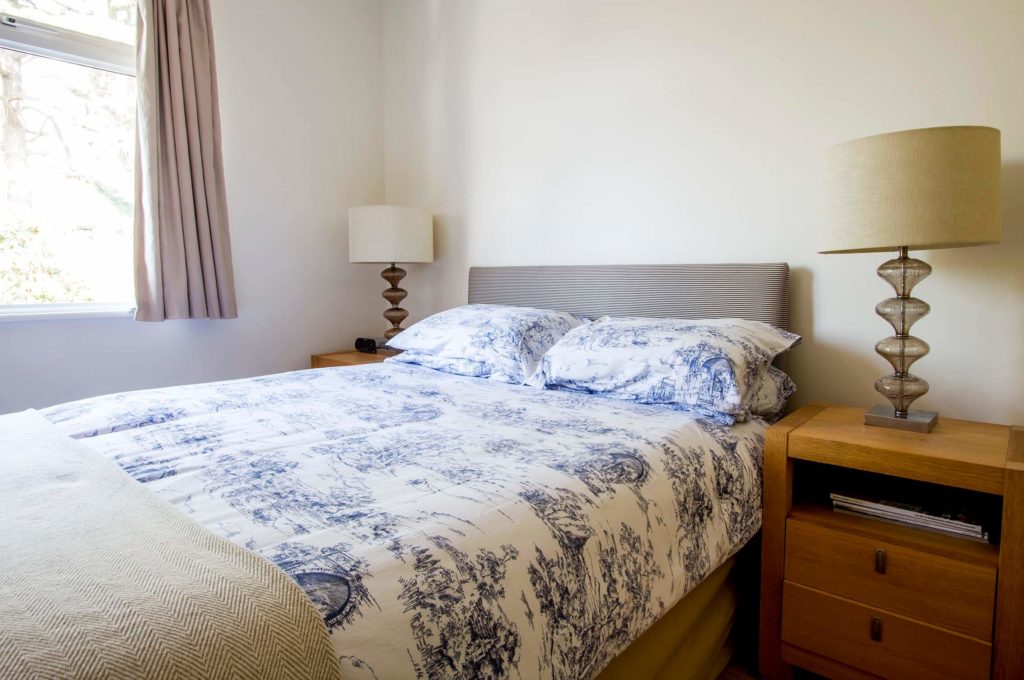 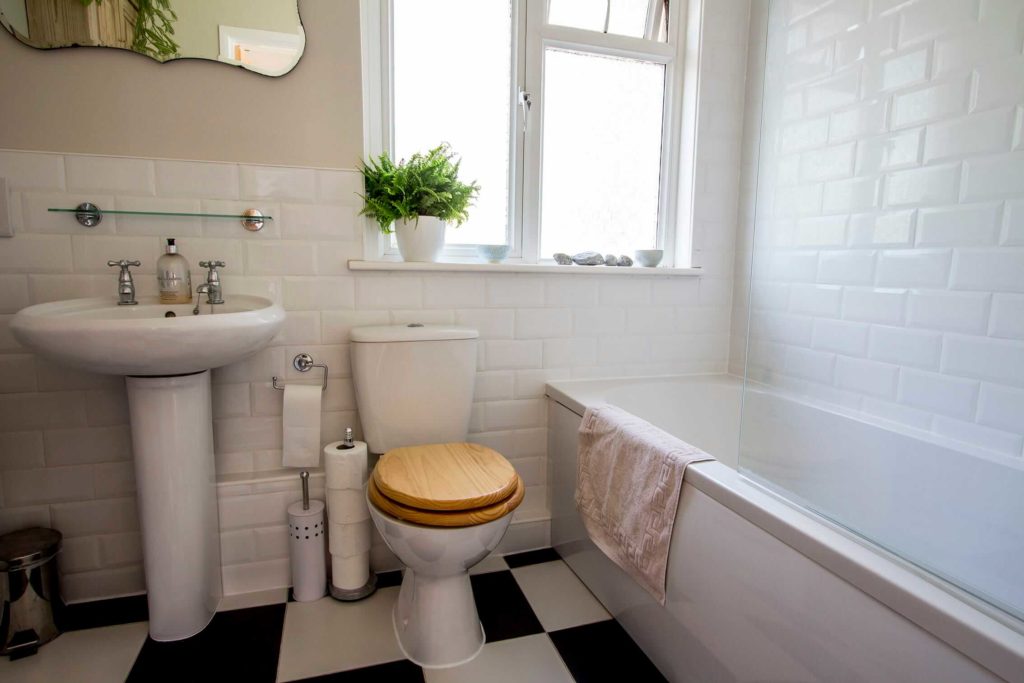 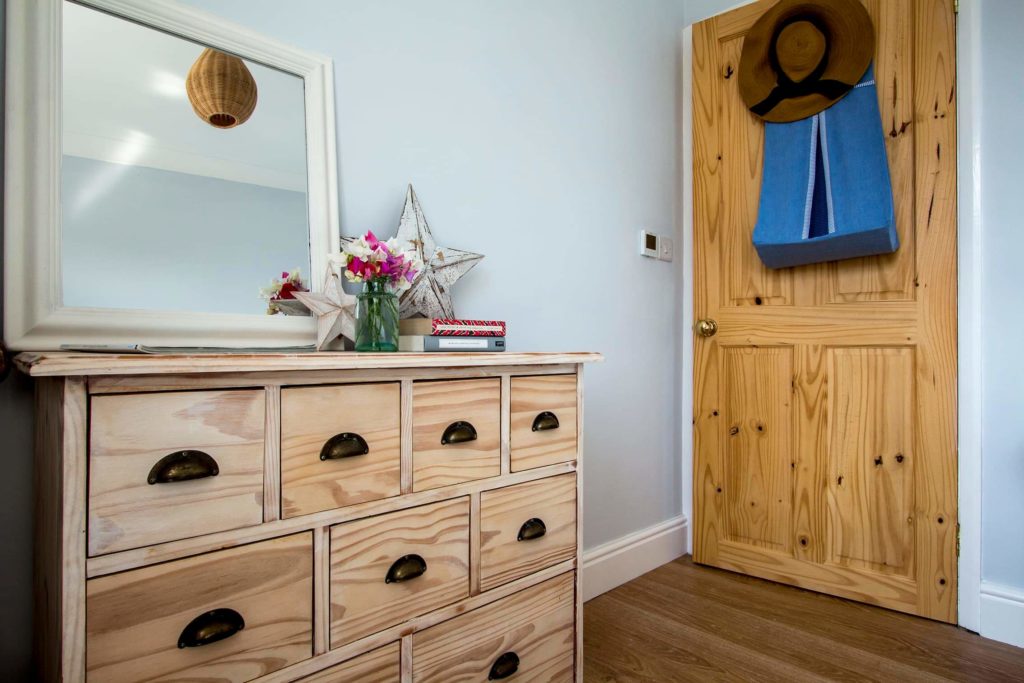 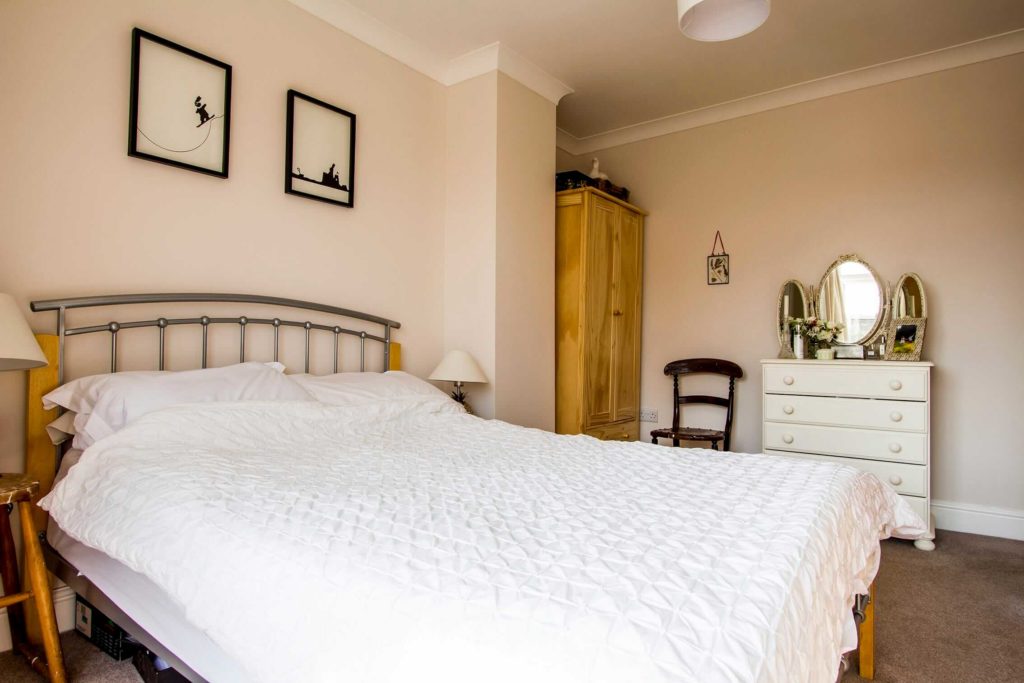 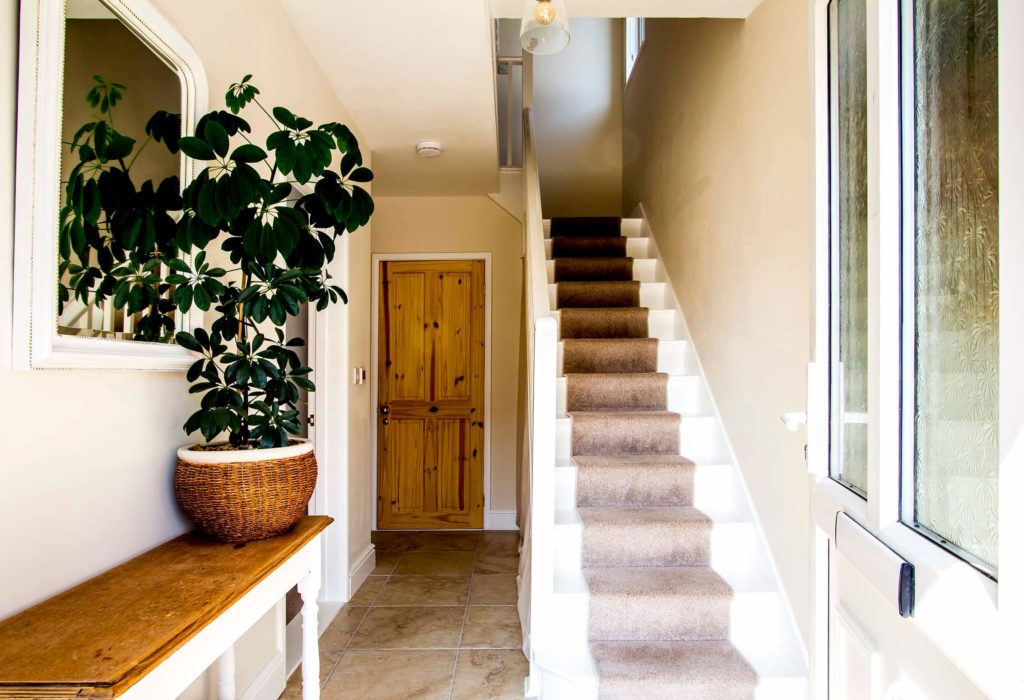 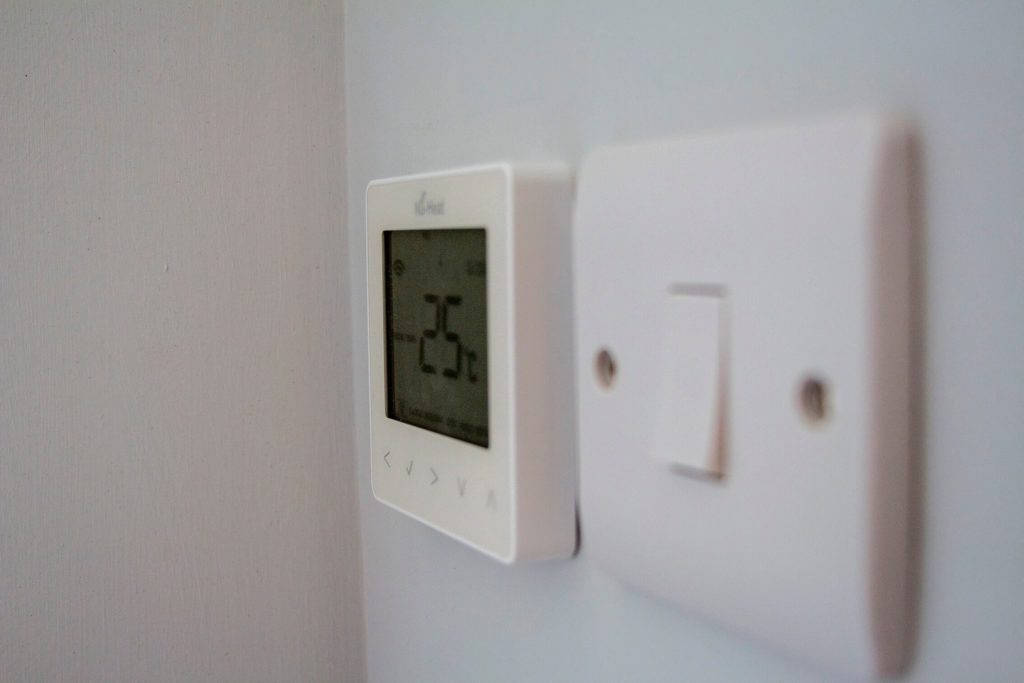 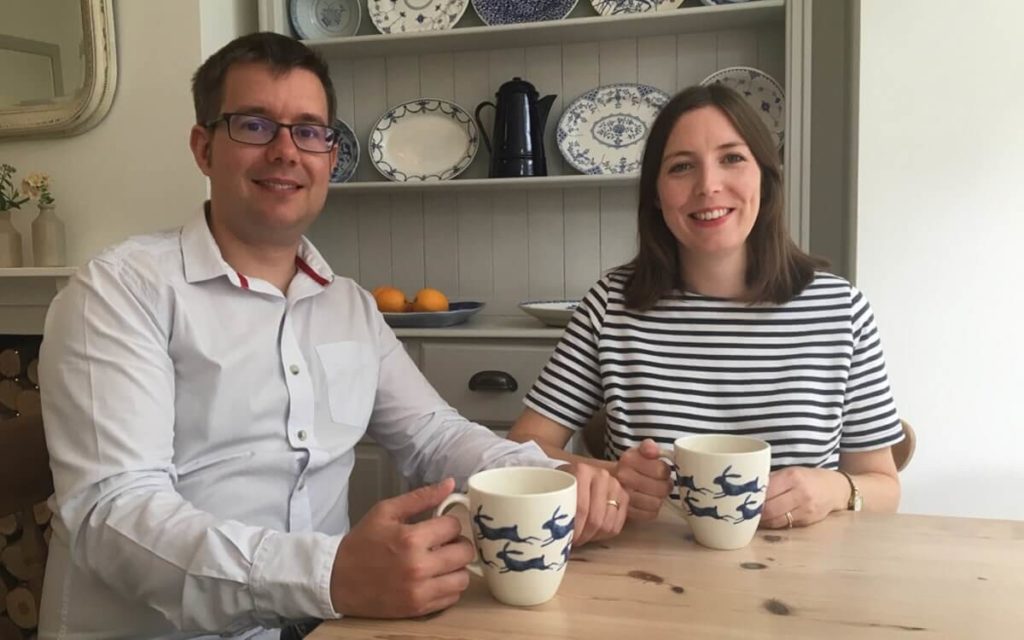 A bespoke-designed underfloor heating system combining LoPro®Max on the ground floor and LoPro®10 on the upper floor.

James and his partner Ellie transformed a 1940s property into a modern, family home with a hint of nostalgia.

On the lookout for their first family home, Nu-Heat Design Manager James and his partner Ellie fell in love with a 1940s property in the seaside town of Sidmouth, Devon, and set about transforming it into a modern home with a hint of nostalgia.

It’s fair to say that the semi-detached house needed a lot of work doing to it when James and Ellie got the keys. Built in 1949, it had been home to two generations of the same family from new, and many of the fixtures and fittings had not been brought up to current regulations. There was no central heating – just a few night storage heaters – and the whole house needed to be painstakingly stripped back to bare brick to be re-wired and re-plumbed.James and Ellie were determined to maintain the period feel of the property whilst adding in modern comforts like underfloor heating, and adding an extension at the rear to enlarge the kitchen and dining area.

Having spent 12 years designing warm water underfloor heating (UFH) systems at Nu-Heat, this would be the first time James had designed a system for his own home. After assessing the property’s insulation and glazing levels, James specified two products from the company’s award-winning retrofit UFH range to keep the property cosy – super-slim LoPro®10 upstairs, and high heat output LoPro®Max downstairs.

As one of the tutors on Nu-Heat’s UFH installation training courses, James is no stranger to fitting UFH, but valued the experience of installing the products in his own home.

“It was great to put theory into practice, and see first-hand how the retrofit UFH range adapts to the quirks of older buildings – and our home had plenty of those! We’re really pleased with the results.”

James and Ellie were under no illusion that the house would be finished when they moved in just a few months after getting the keys – particularly as they got married in the meantime – but living on site meant things had to be done in strict order to keep certain rooms habitable while others were being renovated. The underfloor heating was installed in stages to allow the newlyweds to move in.

“We fitted the gypsum board LoPro®10 underfloor heating system upstairs first,” explains James. “Having set ourselves the very tight timescale of moving in before Christmas, we found ourselves living upstairs during a particularly cold winter while work continued downstairs. We even had a makeshift kitchen – which we dubbed ‘the staff room’ – in one of the spare bedrooms.”

“Despite the fact that temperatures in the unheated part of the house were practically Arctic, the LoPro®10 did such a good job upstairs that we ended up turning the UFH temperature down!”

From experience, I know that all Nu-Heat systems are designed to achieve temperature when it is -3°C outside, and when we put that to the test we weren’t disappointed.

“Switching the LoPro®Max UFH on downstairs was a real turning point. Suddenly we had full use of our entire house for the first time – and it was all warm! The UFH works particularly well with the tiles in the open-plan kitchen diner, an area which could otherwise have felt a bit nippy on the north-facing side of the house.”

With a real flair for interior design and a passion for upcycling, Ellie crafted many of the property’s fixtures and fittings from pre-loved items, resulting in a beautifully eclectic mix of old and new. Some of the couple’s favourite pieces were ‘rescued’ from car boot sales, charity shops and online auctions before being lovingly restored. Other features came with the house and have been transformed from drab to fab.

“We decided to keep the fireplaces when we were renovating as they add to the property’s period charm,” explains Ellie, “but with the warmth of the UFH we’ll never need to use them!”

“Doing up the house together was a really great bonding experience as newlyweds,” says Ellie.

“We took on as much of the work ourselves as possible from knocking all the plaster off, to all the tiling, painting and fitting the kitchen. I’ve learnt so many new skills. There were real highlights in the process such as pulling the textured wallpaper boards off the stairs to reveal the original banisters underneath, as well as a few late nights trying to use up tile adhesive before it went off. We really feel we’ve built our family home together.”

“The underfloor heating means we don’t lose any space to radiators. I love the flexibility of the UFH, we can control each room separately at the touch of a button on the thermostat or using the app remotely – great for when you’ve been away and want to come back to a cosy house.”

“House guests always comment on how nice it is to get out of the shower to a warm bathroom floor,” Ellie adds.

Tailor-made solutions for all properties

Whatever the age, size or construction of your home, chances are it’s suitable for underfloor heating. Whether you’re plotting an extension, tackling a new build or giving your existing home a complete overhaul, Nu-Heat will design your underfloor heating to be the perfect fit.

Call Nu-Heat on 01404 549770 or email info@nu-heat.co.uk to discuss your upcoming projects. You can also view our Underfloor Heating page for more information

< back to case studies