By switching from an oil boiler to an ASHP for space and domestic hot water heating, an average UK household will save 4,523 kg/CO2 each year.

By switching from a gas boiler to an ASHP for space and domestic hot water heating, an average UK household will save 2,330 kg/CO2 each year.

With the average yearly C02 production of a meat and fish eater being around 2049 kg/CO2 per person, each year, it’s easy to see how it can rack up quickly for a whole household! For the average size family of 2.4 people, changing to a vegetarian diet would save the planet 1,589 kg each year – and a whopping 2,393 kg/CO2 for a vegan household.

A lot of resources go into the production of food, so when that food is wasted, it’s harmful to the planet. The greenhouse gas emissions that go into the manufacturing, storing and moving of food all contribute negatively to climate change. Take bread for example: just a single loaf takes roughly 100 buckets of water to produce.

Studies show that if we were all to stop throwing out food, we would save roughly 17 million tonnes of carbon dioxide being emitted each year. This equates to one in five cars being taken off the road. If each person in the UK wastes around 68kg each year then an average household would be emitting 1,261 kg of unnecessary CO2 each year.

Reducing food waste means that less food will ultimately be needed to be produced, reducing the impact on the planet’s resources and also saving money for those doing the shopping!

We can reduce food waste by planning ahead and only buying what we need. Making new meals out of left-overs and freezing food for later also minimises what we throw away.

Switch from C to an A+++ efficiency class fridge-freezer

Separate fridge and freezer appliances can use up to 20% more energy than a single combination fridge-freezer per year. So if you you have the space, fit a combined appliance to save energy.

Not only will switching to a more energy-efficient fridge-freezer save you money – it will also cut down your energy use by as much as three quarters! A C-rated appliance uses 816 of kWh per year, whereas an A+++ typically uses just 206.

Use a dishwasher rather than handwashing dishes

Scrubbing dishes at the kitchen sink? It may be time to invest in a dishwasher. Hand washing dishes creates over double the amount of GHGs as dishwashers, and produces about the same carbon emissions as 3 flights from London to Tokyo!

Recent studies state 5,620 kgs of greenhouse gases (GHGs) are produced over a 10-year period from hand-washing an average of 32 sets of dishes per week. This comes from the energy used to heat up the water. A dishwasher, on the other hand, emits only 2,090 kgs of GHGs over the same period. The figures speak for themselves.

Set your washing machine to 30 degrees

Using a washing machine at 30 degrees is a small change with a big impact. The switch from 40 to 30 degrees both reduces CO2 emissions, and saves energy, with no detrimental effect to the results of the wash. It can help save money and protect your clothes too. So it’s a win-win situation.

Which? Found that washing at 30 uses 38% less energy. If everyone in the UK were to implement this, it would save 858,000 tonnes in CO2 emissions every year. That’s the equivalent of 400,000 cars being taken off the road.

With the average washing machine producing around 117kg CO2 per year this would mean a saving of 44.46kg/CO2 each year.

The average household in the UK will generate around 2,745 kg of CO2/year just from heating. Water based underfloor heating systems are approximately 25% more efficient than radiators and can cut the average emissions to only 686 kg of CO2 per year.

Turn your thermostats down by one degree

By turning the thermostat in your house down by just 1 degree, you can save up to £60 on your electricity bill, and cut your carbon emissions by 310 kg a year.

Turning appliances off at the wall can save 58 kg of CO2 a year – and can also cut your electricity bill by about 8%.

LED lights use significantly less energy than standard lightbulbs. Changing 10 lightbulbs to LED bulbs will reduce your CO2 emissions by around 50 kg a year.

Buy second hand or upcycle one piece of furniture

The average piece of furniture will use about 47 g of CO2 to produce and transport. You can cut your carbon emissions by buying furniture second hand or upcycling old furniture.

Fix just one leaky toilet flush in your home

Between 5-8% of the toilets in the UK are leaky and most are going unnoticed. As a leaky toilet flush loses around 215 and 400 litres (between 1.72-3.2 kg/CO2) of fresh water each day, this can be a serious drain on your water bill – as well as the environment. For the average size family this adds up to 876 kg/CO2 of wasted water each year!

Reduce showering time by half

The average person takes a 7.5 minute shower, which emits 625 g/CO2. Assuming they have one shower every day, this adds up to 225 kg/CO2 emitted per person per year, and for the average household of 2.4 people, this number jumps to 5.48 kg/CO2 per year.

Turn the tap off whilst brushing your teeth

One litre of cold water from the tap accounts for 0.008 kg of CO2 emissions. This may not sound like much at first, but let’s assume you leave your tap running whilst you brush your teeth for two minutes twice a day.

So make sure you turn that tap off!

A dual flush toilet uses 5 litres of water, compared to 13 litres from a regular toilet.

One litre of cold water used in a home is equivalent to 0.008 kg of CO2 emissions, and the average person will flush the toilet 5 times a day on average. Assuming we spend about ⅓ of our active time at home, this means we’ll flush approximately 1.17 times per day at home, or 2.8 times for the average Uk household of 2.4 people.

Using a dual flush toilet will save the average uk household 22.4 litres of water each day, adding up to 8,176 litres per year.

Switching to a dual flush toilet saves up to 65 kg/CO2 per year per household.

If you spot a dripping tap you could be seeing around 5,500 litres of water a year go to waste. By fixing it you could save yourself a penny and the environment up to 44 kg/CO2 each year!

A human being produces a lot of C02 over their lifetime. Choosing to have one less child can reduce your potential carbon emissions by 58,600 kg per year.

Avoiding fast fashion and opting for more sustainable brands is a great way to cut back on your carbon emissions. Every 1 kg of clothing created emits 3.75kg of CO2 during production and shipping. On top of that, a large percentage of clothing that is never sold will end up in landfills, which contributes further to carbon emissions.

The average UK family household will buy 64 kg of new clothing per year, which adds up to around 240 kg of CO2 emissions.

By choosing to buy half of your clothes at charity shops, you can cut your carbon emissions by as much as 120 kg per year.

Install solar PV panels on the roof of your home

The Energy Saving Trust estimates the average UK home with a solar PV system installed could reduce carbon emissions by 1,000 kg/CO2 per year depending on where you live in the UK.

Add a solar thermal system to your home

These systems use solar panels to transfer the collected heat to heat up water. A hot water cylinder stores this heated water for use during the day. By using these systems, you can reduce your carbon emissions by about 400 kg a year. Though depending on your current system you may be able to save even more!

Change your energy supplier to 100% renewable

Switching your supplier to one that provides 100% renewable energy can save around 1500 kg/CO2 – that’s roughly the weight of a walrus!

Add 270mm of loft insulation to your home

Insulating your roof can save you around 150 pounds a year on energy bills and save a significant amount of carbon emissions, depending on the type of house. A mid-terrace house can save around 530 kg/year, a semi-detached can save up to 580 kg/year, and a detached bungalow or house can save between 830 and 1310 kg/year.

Add cavity wall insulation to the walls of your home

Cavity wall insulation consists of Mineral wool, EPS bead, or PU foam pumped throughout the wall cavity between the outer and inner brick walls of your house. This can reduce internal draughts, and depending on the type of house you own, save you around 325 kg (flat), 415 kg (mid-terrace), 440 kg (bungalow), 660 kg (semi-detached), and even up to 1100 kg (detached house) of carbon emissions per year.

Add floor insulation to your home

In a terraced house, insulating the floor can save you around 120 and 175 kg of carbon emissions per year, while a detached house may benefit from saving 270-300 kg/year.

Change from a petrol car to an electric or hybrid car

Want to cut your carbon footprint by tens of thousands? Choosing the right type of car can do that for you.

Whilst switching to a hybrid electric vehicle can cut emissions to 14,291 kg per year, a fully electric car can take you down to an incredible 6,312 kg of CO2 per year! That’s ovver72% less CO2 per year than a petrol car.

Flying is one of the most damaging ways to travel. A single flight from London to Berlin emits 600 kg of CO2, three times the same amount of emissions saved over three years of recycling.

And flying doesn’t only emit CO2 into the atmosphere. Harmful toxic gases, including soot and nitrous oxides, are also released into the air.

Choosing destinations you can reach by train is a great way to reduce CO2 emissions. A family of 2.4 taking a return train from London to Nice emits 31 kg of CO2, compared to flying which releases 780 kg of CO2.

Cycle for 100 miles instead of driving a petrol car

Cycling is a great way to cut down on carbon emissions when possible. The CO2 emissions from production, and the food used to power them, are a fraction of the amount produced by motor vehicles. A conventional bike will only emit 21 g of CO2 per Km travelled, while an electric bike cuts that down to 14.8 g of CO2 per km travelled.

Change your petrol mower to electric

An hour’s mowing with a petrol mower produces a significant amount of emissions. About 11 times the emissions produced driving the average new petrol car for the same amount of time. And we’re not just talking about those tractor style ride-on mowers, either.

Whether you ride on it or walk behind it, if it’s powered by petrol your mower will consume roughly 88 kg/CO2 per year compared with just 14.4 kg/CO2 for the electric equivalent.

Plant a tree to capture carbon

Offsetting carbon can start in the garden just by planting a tree. Of course, the space you have and the type of tree you choose will be things to consider, but on average it will absorb anywhere between 10 and 40kg of CO2 per year with an average of 25 kg/CO2.

A ponds’ burial rates for organic carbon are often much higher than the rates to surrounding habitats such as woodland or grassland. The average size of most ponds is 10′ x 15′ (roughly 150 square feet) with the deepest point being 24″. So on average, that’s 21 kg/CO2 saved per year.

Our office will be closed over the festive period, from midday on Christmas Eve until 8am on Tuesday 4th January. 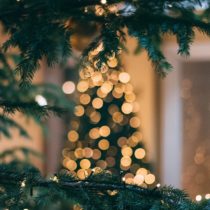